Today was an incredible day & it was day 4 of our last camping trip of the year. I woke up before the two of you and felt such bliss watching you sleep, I felt so grateful for all the experiences I get to share with you both. The other bed broke just as we were going to bed last night so we all squeezed in and cuddled up on one and surprisingly it was super cosy!  You woke up a couple times during the night in tears because of a dream you had about Little (the name you gave one of the pigs we've been seeing a lot of lately during this seasons Pannage which is also the name you gave your little piggy figure at home), saying he was trying to get to the forest but couldn't.  You and I laid awake for a while afterwards listening to a very noisy stag bellowing in the night & you were in awe of the sound and loved listening to him just as much as I did. I couldn't help but wonder if it was the same stag we ran into on our walk a couple days ago, I was in awe of how majestic he was.

I got up before you two and went outside to boil some water. When you did wake up, you were Max, daddy was Katy and I was Norman but eventually you changed your mind and I became Gidget (these are all characters out of one of your favourite films, The Secret Life of Pets) & we are only allowed to speak to each other using these names. Then me & daddy or I mean Katy had our morning coffee and you had your hot chocolate. You were in such a sweet cuddly mood and gave me endless kisses. These are my favourite kind of mornings!

Before we even had a chance to have breakfast you begged to go see if we could find the piggies, that's all that has been on your mind this whole trip and we said OK but reminded you that we may not be able to find them, they could be anywhere. But we got really lucky because they ended up being right by the entrance to the campsite! We ended up having one of the best pig encounters we've ever had so far, you truly are an animal whisperer; one little piglet just came up to you and plopped her little body down right beside you and wanted you to stroke her belly!! It was amazing!

It was hard for us to get you to leave them but we managed to get back to tent to have a very late breakfast. But to your absolute delight the piggies had already made it all the way through the campsite and ended up being right near our tent so while I made our porridge you & daddy (Katy) spent more time with them.  There were some older boys who were also there with the pigs and they weren't being very nice to the piggies, throwing acorns at them and being really loud and scaring them and this really upset you and I was very proud of you for telling them to stop and to be nice.

You haven't been eating so great because of your cold but after lunch we made a leaf crown which you had been really wanting me to do but then when I finished  it you didn't want have it on for more than a minute. We had a lazy day just taking it extra slow, exploring the woods closest to us. You did request to have your leaf crown on when we went on our adventure though saying it was going to be your special feather finding crown and now we've added lots of feathers to our collection for a feather crown (which you requested) but were gonna have to finish at home because I don't have all the things we need for it here.

During today's little woodland exploration we found a Newt and you were so adamant about having to be the one to pick her up and put her back somewhere safe & as usual you had to give her lots of kisses before saying bye. We also saw lots of mushrooms, you are always the first one to spot them and have been demanding that I take photos of them. Your favourite tree at the moment is Hawthorne and every time we pass one you jump up and down with excitement shouting out "Hawthorne! it's a Hawthorne!! It impresses me because if I'm totally honest you and I learned the name of that tree at the same time!

Then we had a little picnic on Balmer's lawn and just relaxed in the autumnal afternoon sun. It was so relaxing. You were exceptionally cuddly and kept wanting to give your little brother, Light (your current name for him) lots of hugs and kisses, I just had to remind you to be extra gentle, you like to kiss really hard thinking you need to in order for him to feel it!  We had some crisps as a little treat and I was about to open it for you when you stopped me,  I didn't know you were able to open the packet yourself and you were super excited to show me and the look on your face when you did it in front of me was priceless, it was another little moment that I will cherish!

Ever since your encounter with the pigs earlier in the day, you've been extra obsessed with them bringing them up constantly telling us how you need to be with the pigs so we ended up seeing if we could find them and once again we got lucky. I love how protective you have become of them, yelling at other children when you see them throwing acorns at them worrying they're gonna get hurt. After a while they ended up making their way to their special field where they must live by going underneath a fence and you got so incredibly sad, wanting to go with them saying you are a piggy too and that you want to be one so you can be with them, your love for this group of piggies is huge!

We headed back to our tent and  you had fun playing in DeeDee (our Car) pretending to drive and then became busy selling us ice cream. You didn't want to eat so much tonight for dinner, it's hard when you're a bit poorly but you requested your paper and pens which haven't come out once since we've been here so you could draw a self portrait and a picture of your little brother, it was so sweet, you rushed into our tent and became so incredibly focused. The rest of the night was spent drawing by torch light and you teaching us your yoga moves. Bedtime since we've been here has been really easy & tonight you fell asleep in my arms while I sang to you. I'm just a little sad it's our last night out in the woods until next year but grateful and so happy that we were able to have one last camping trip of the year. These trips have become so special to me and next year instead of just the three of us there will be four of us! 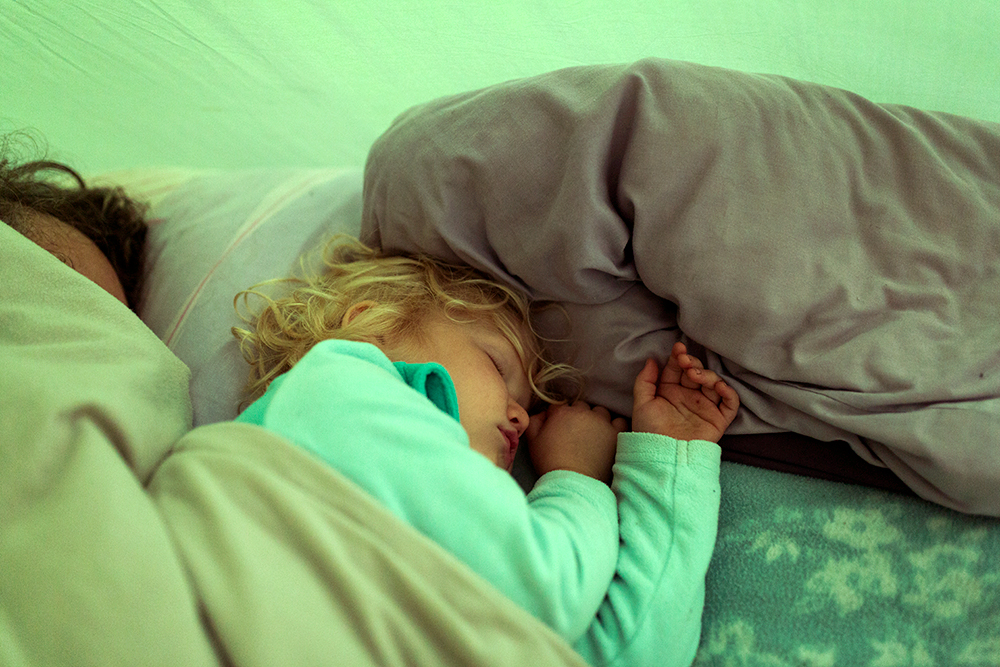 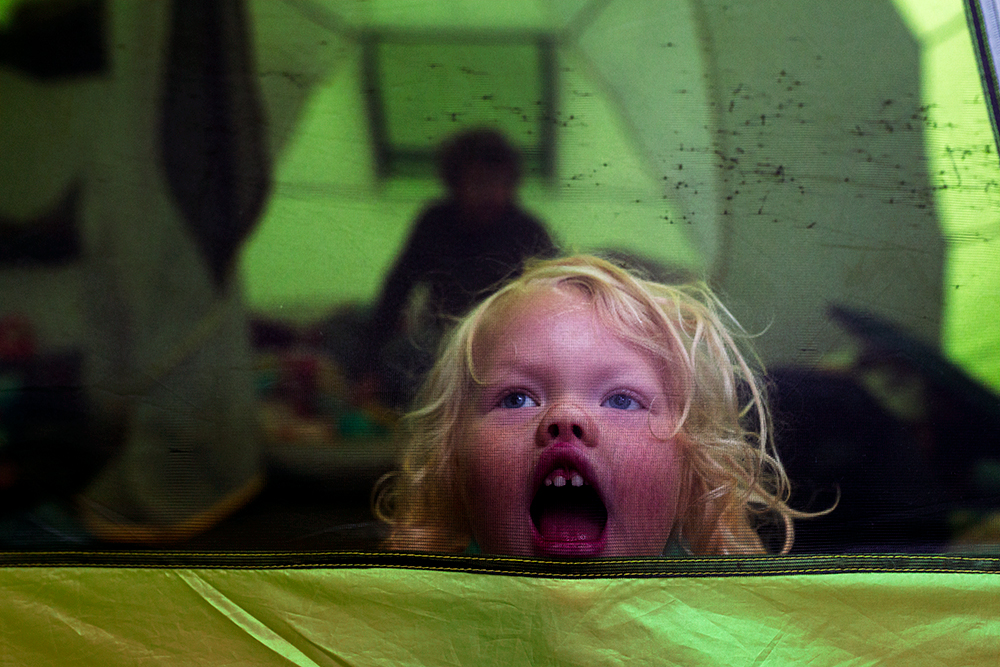 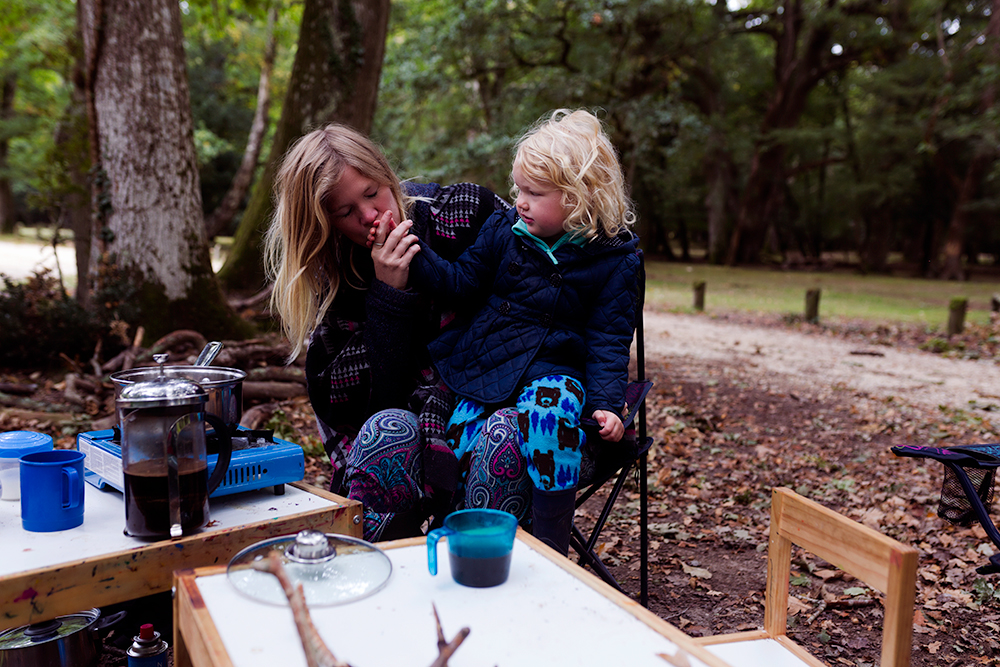 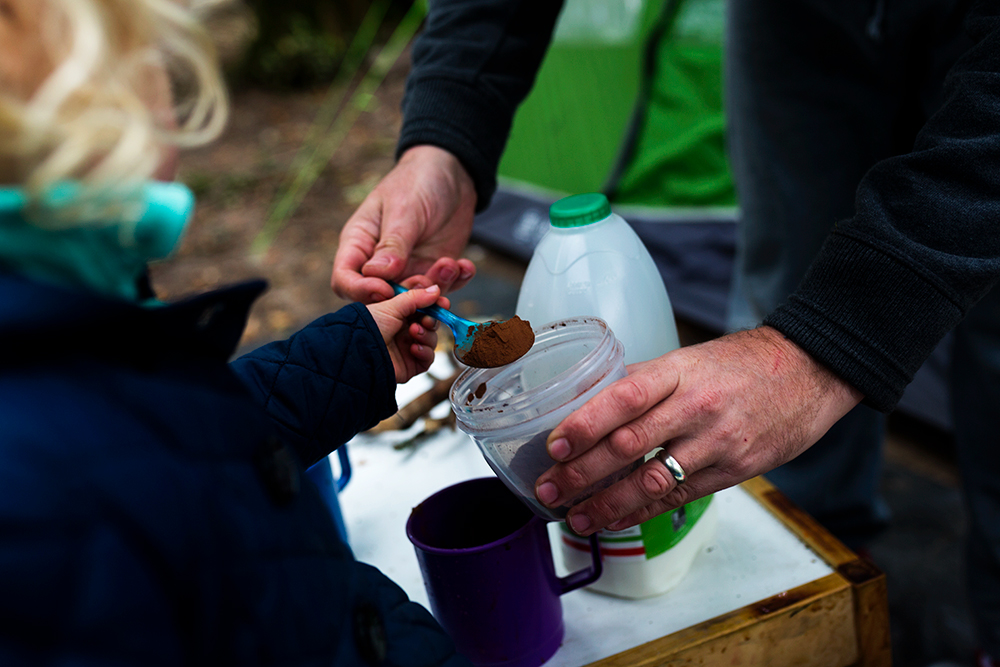 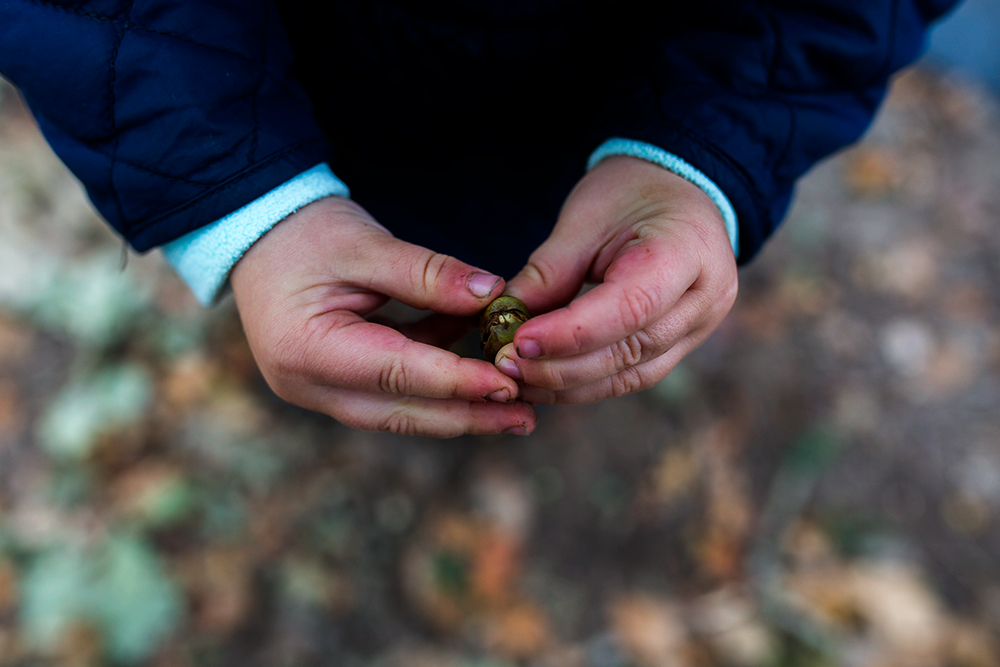 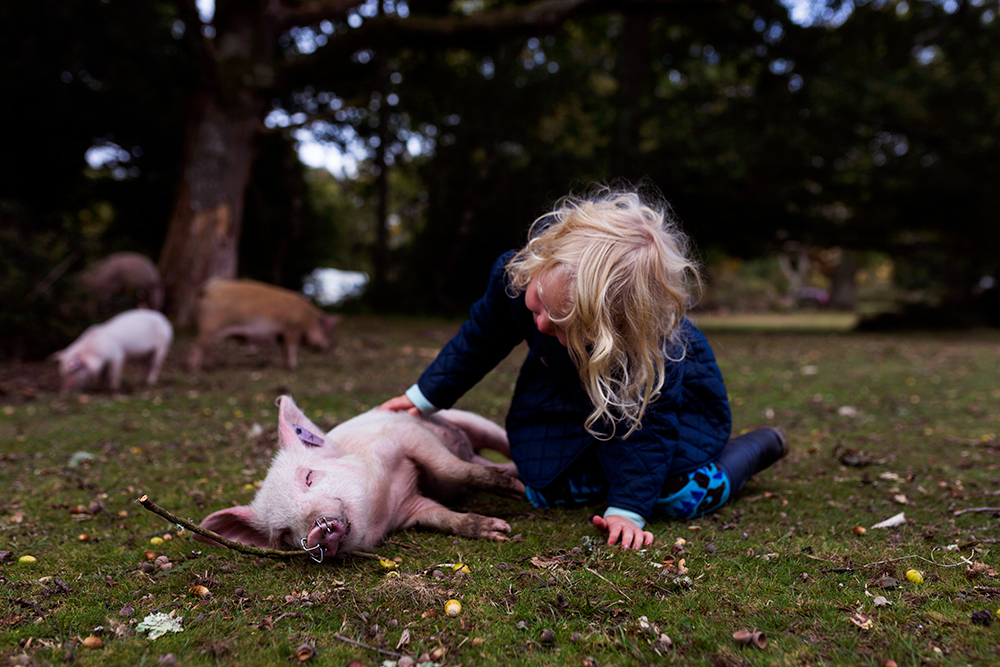 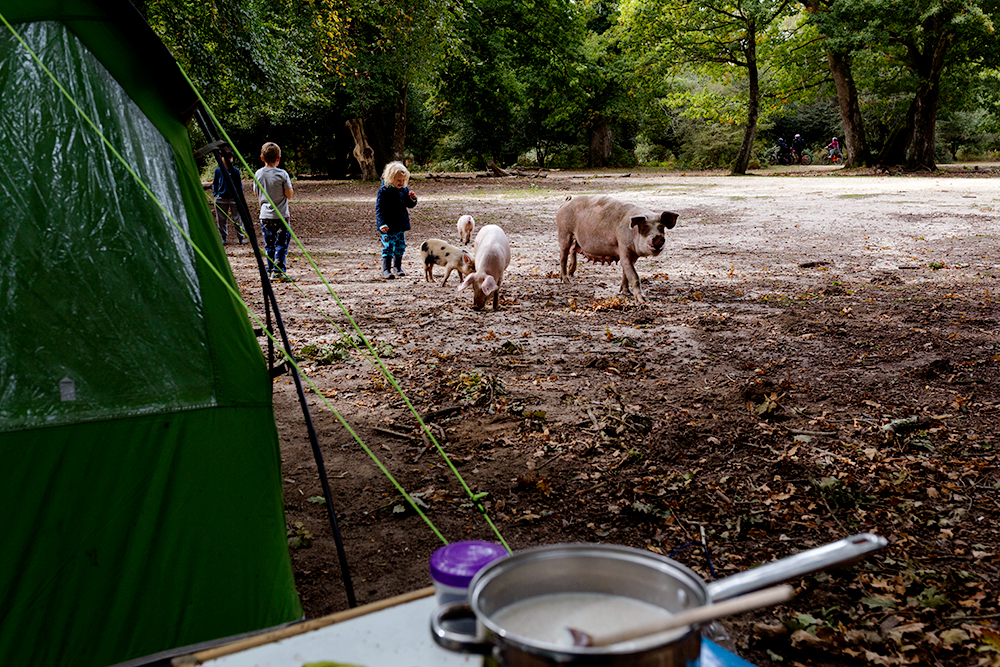 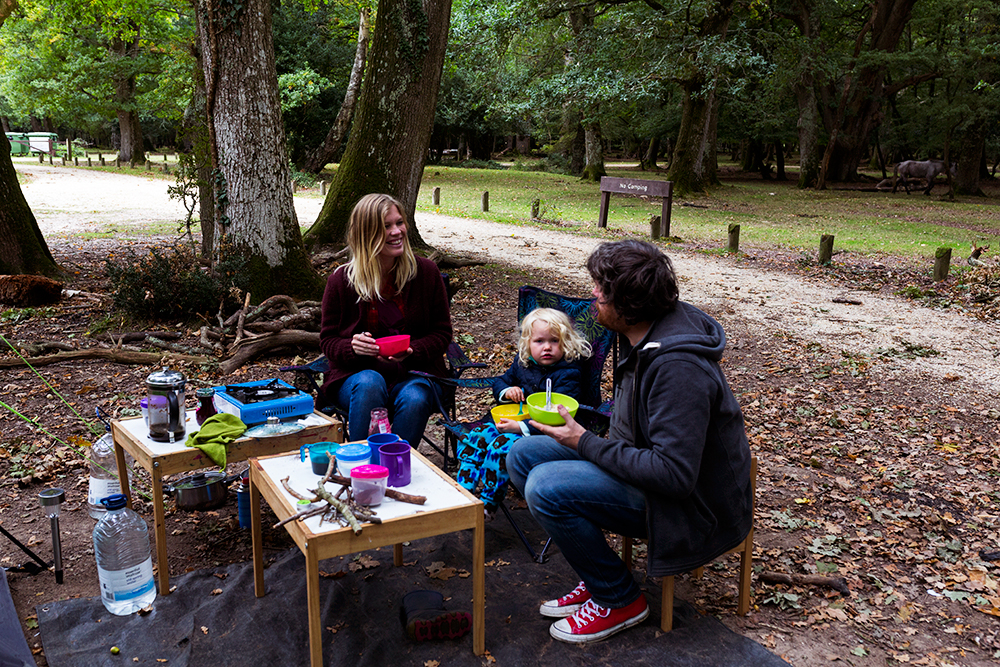 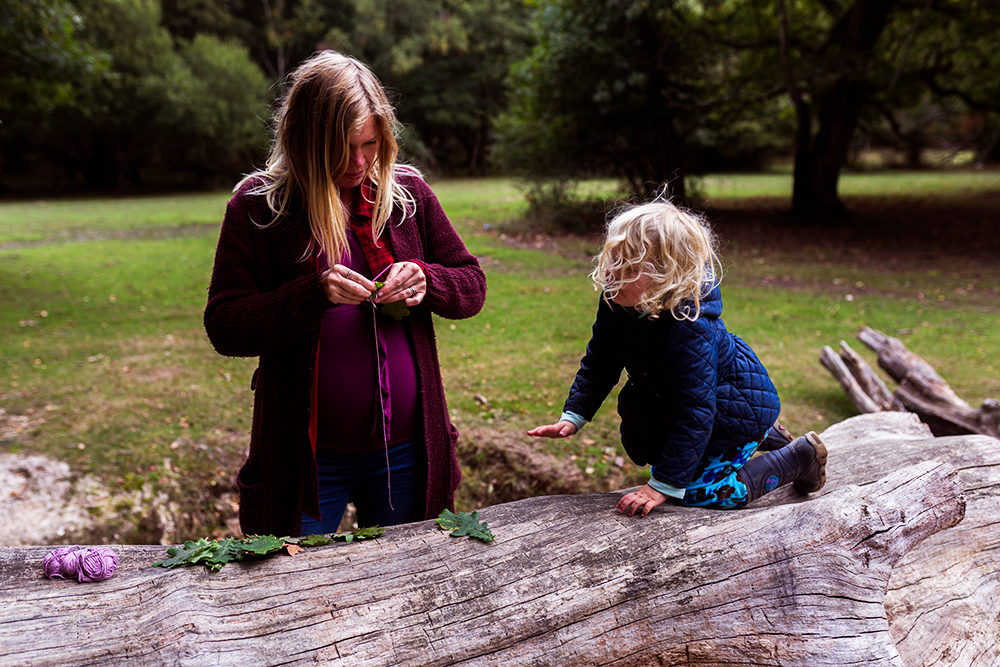 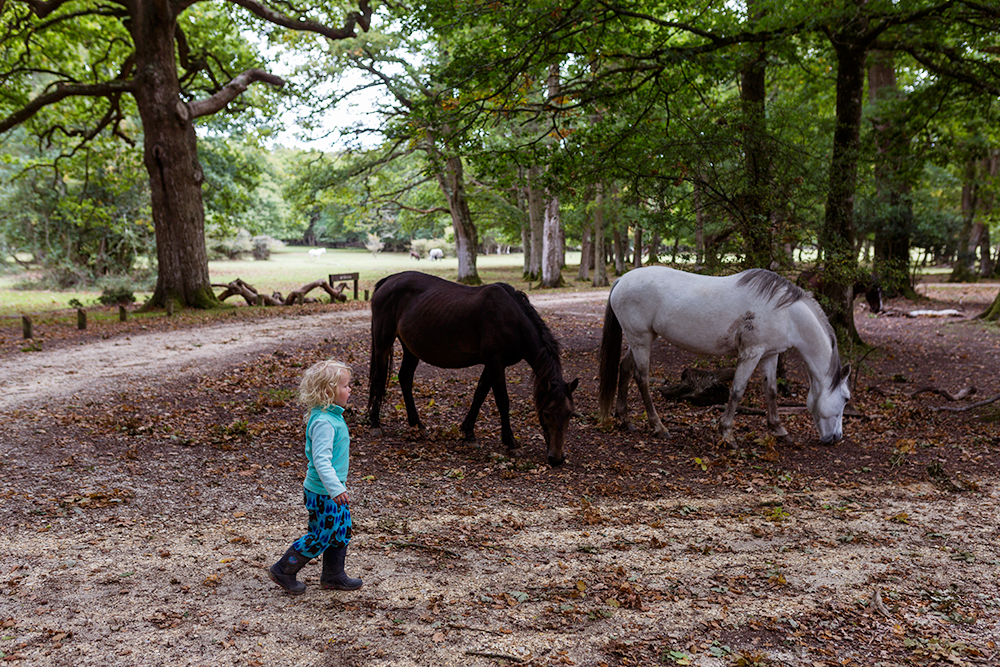 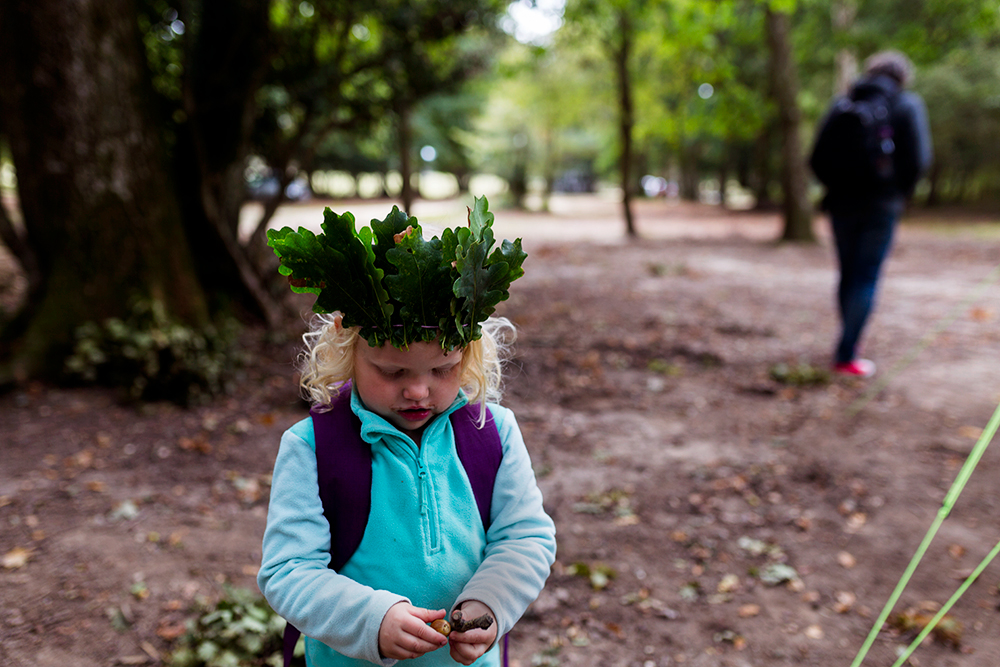 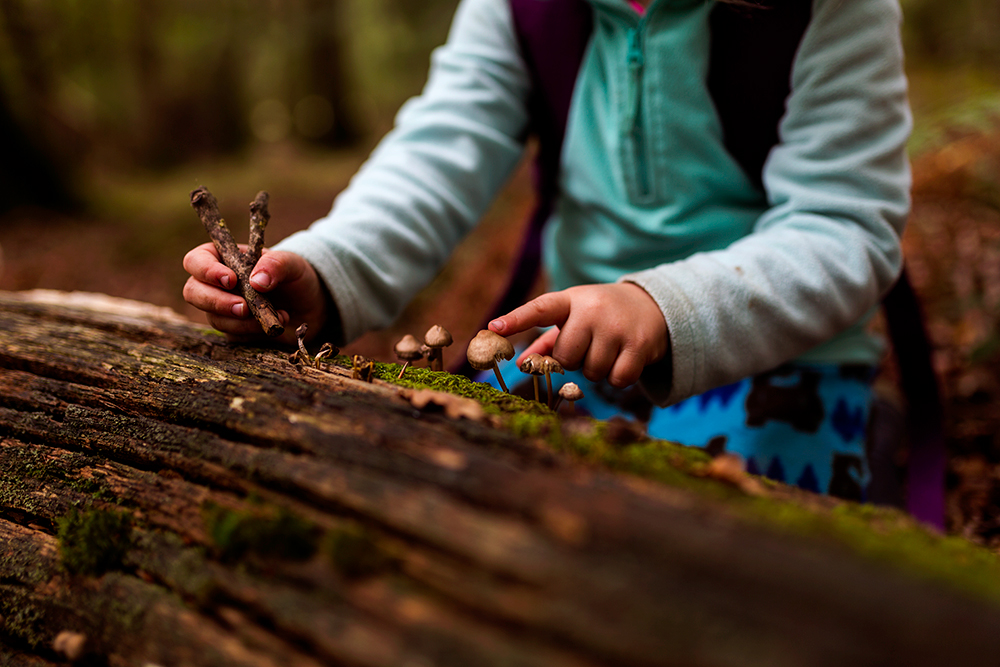 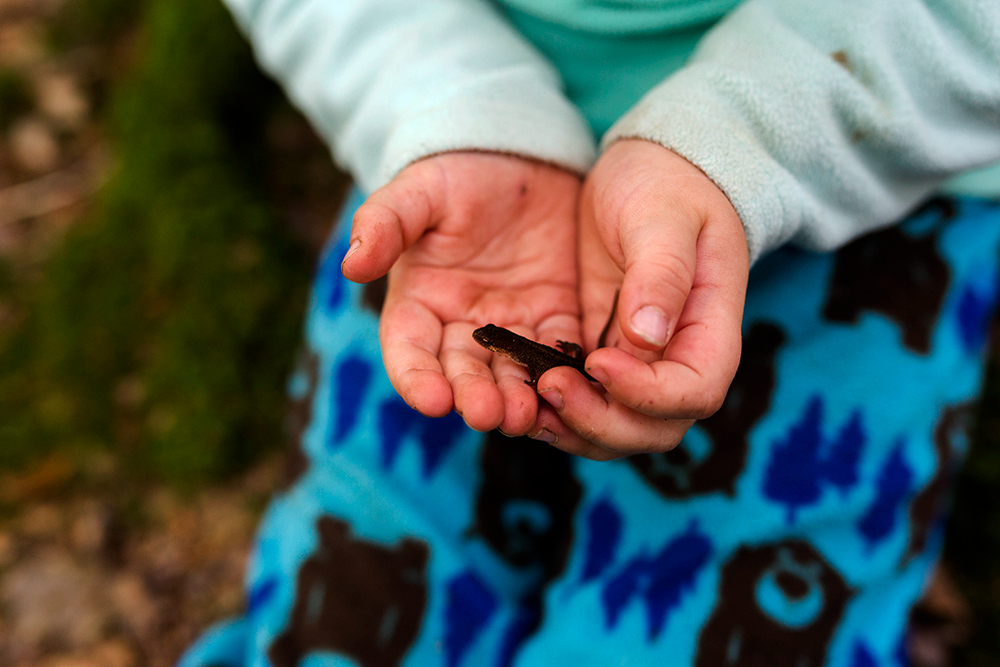 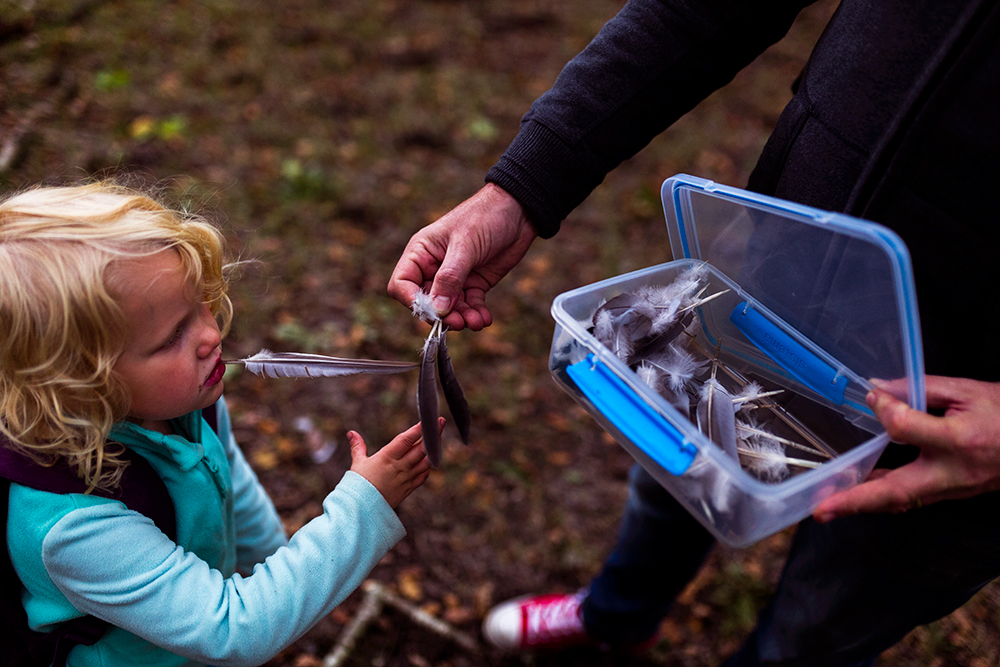 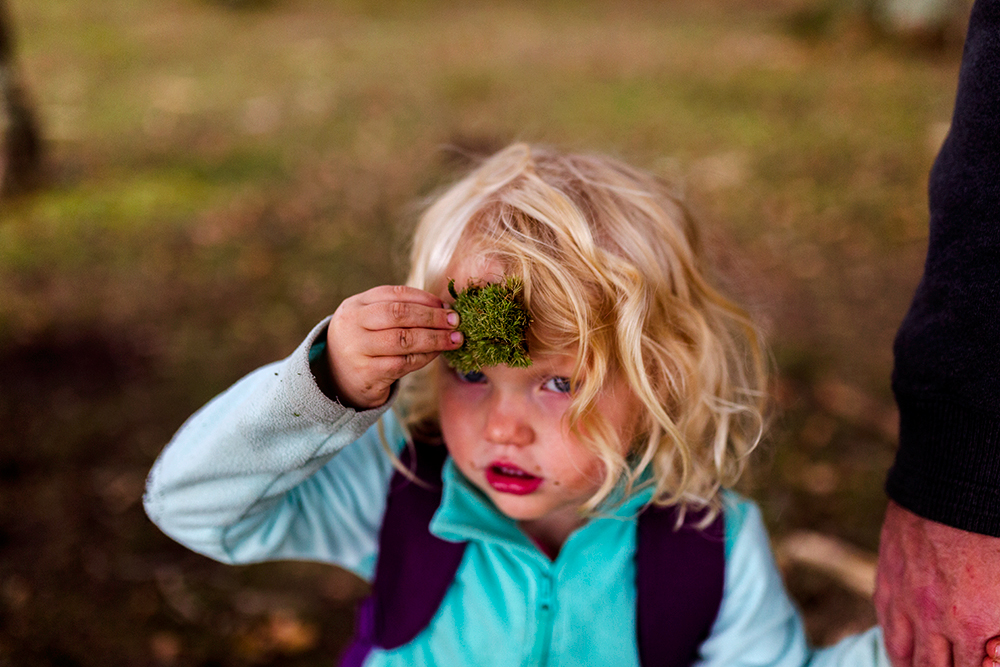 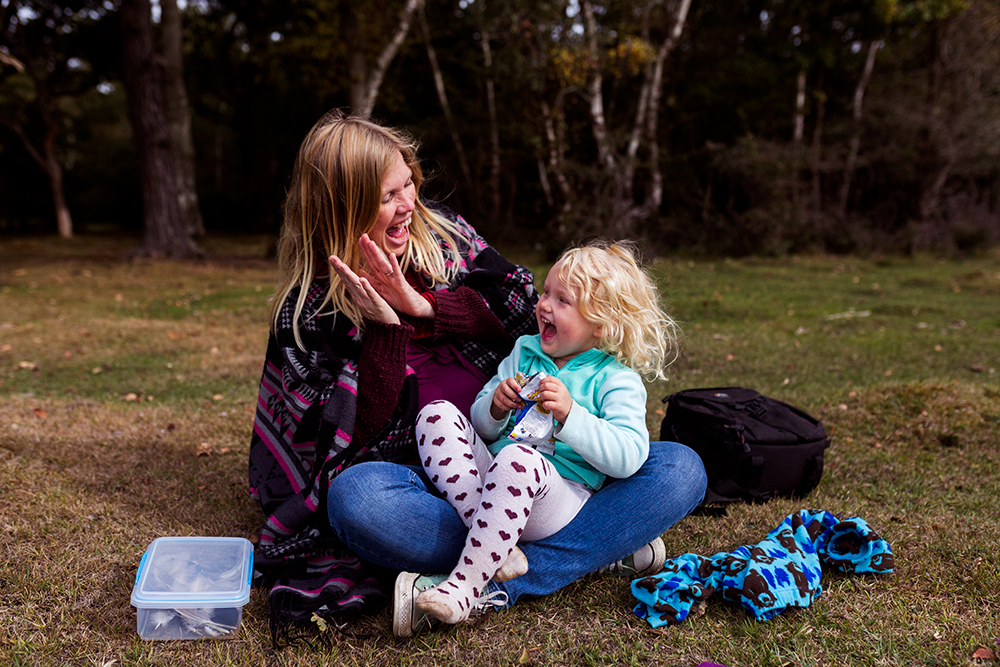 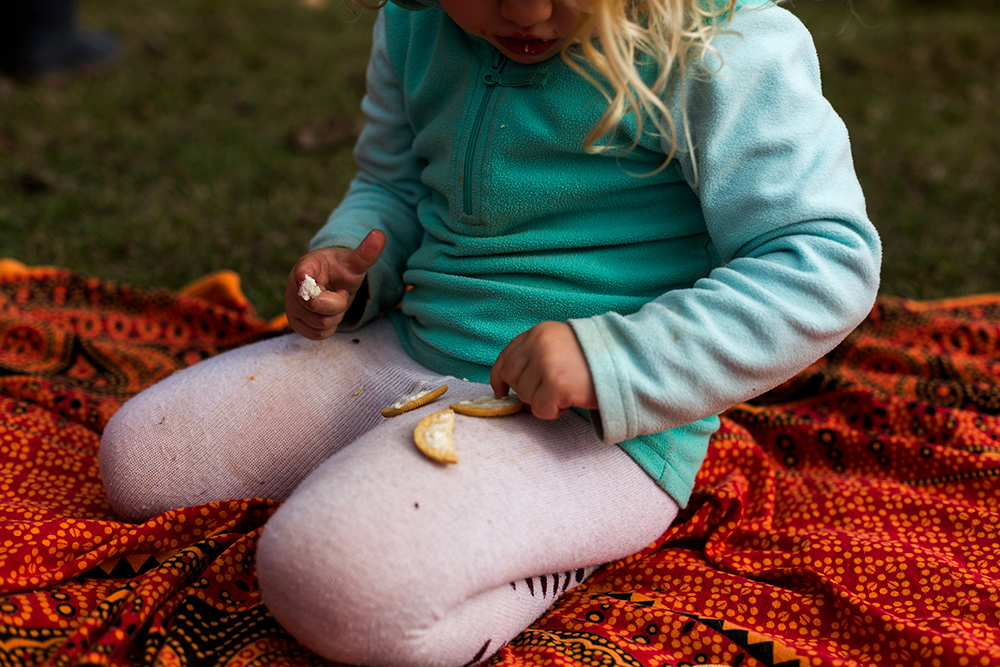 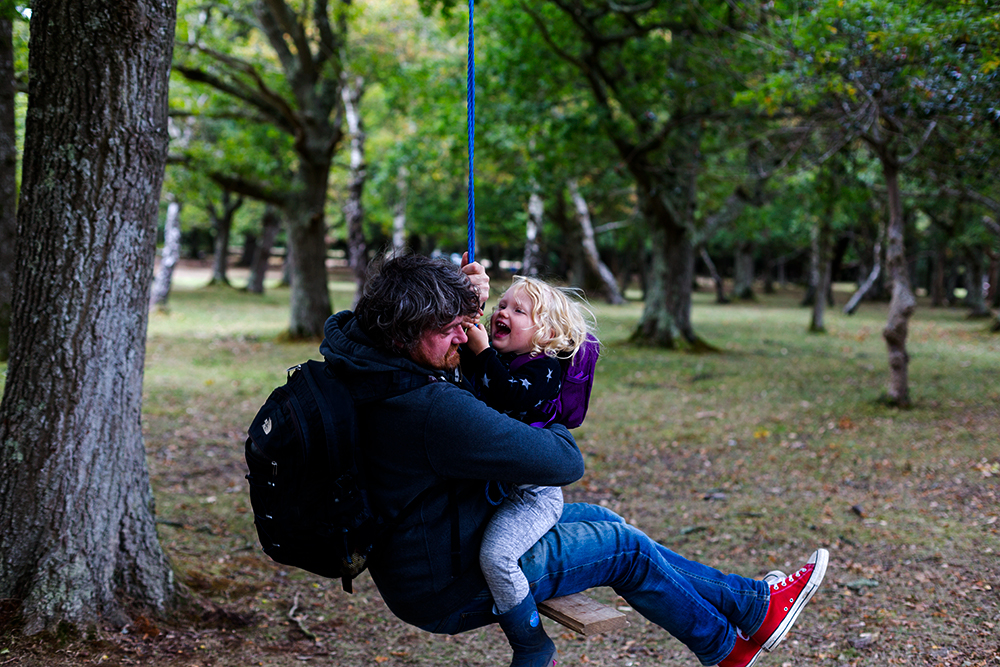 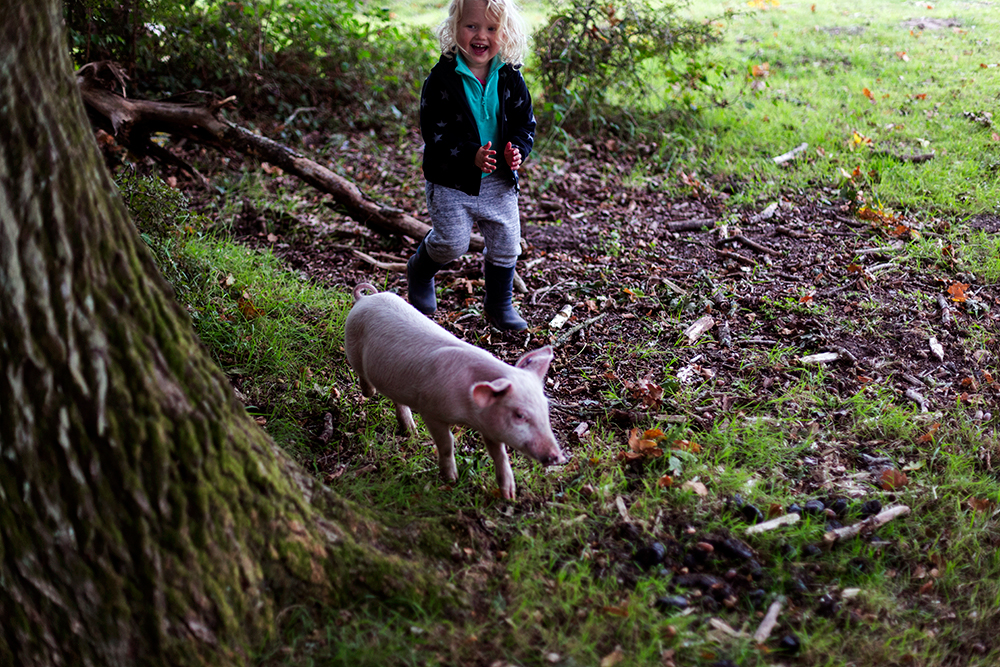 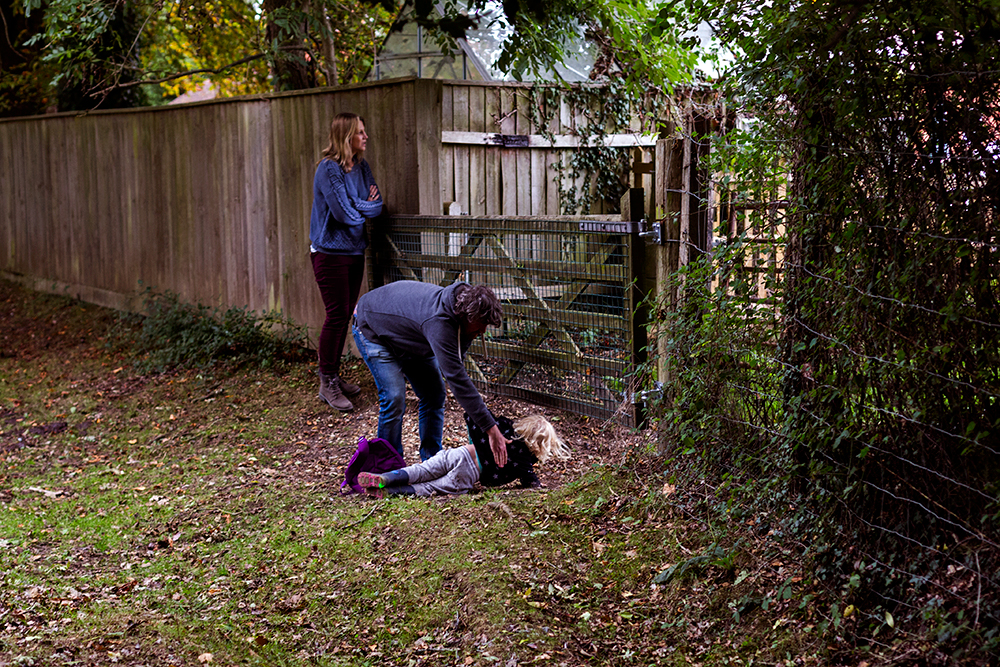 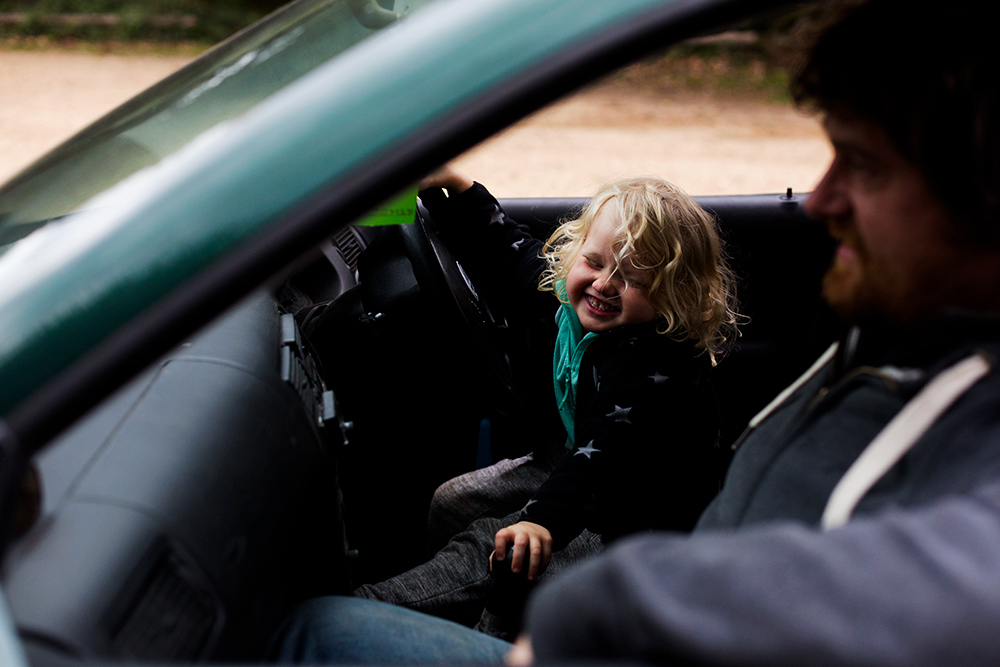 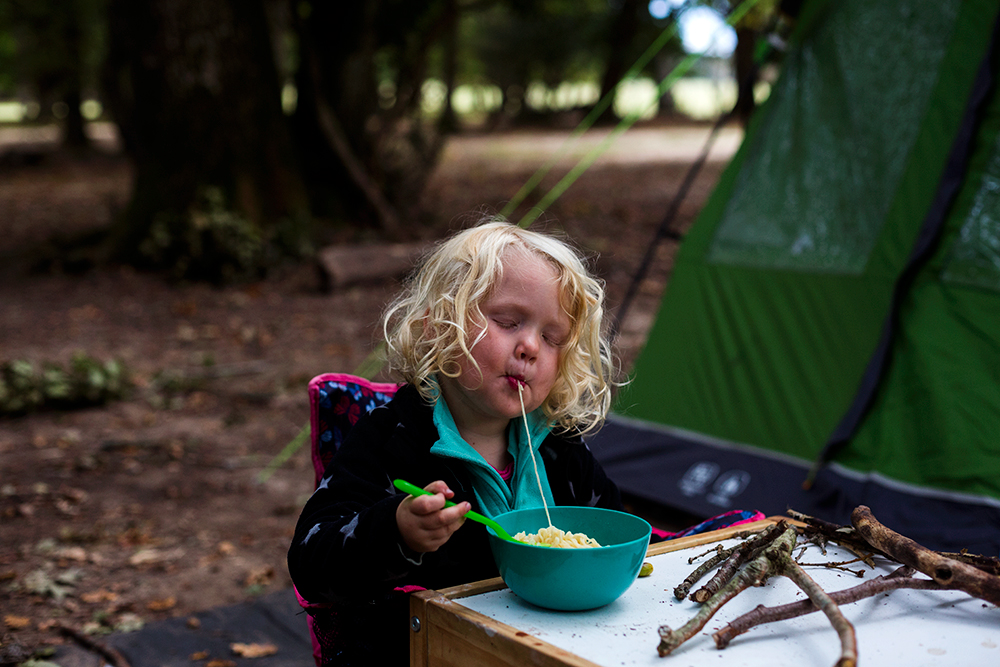 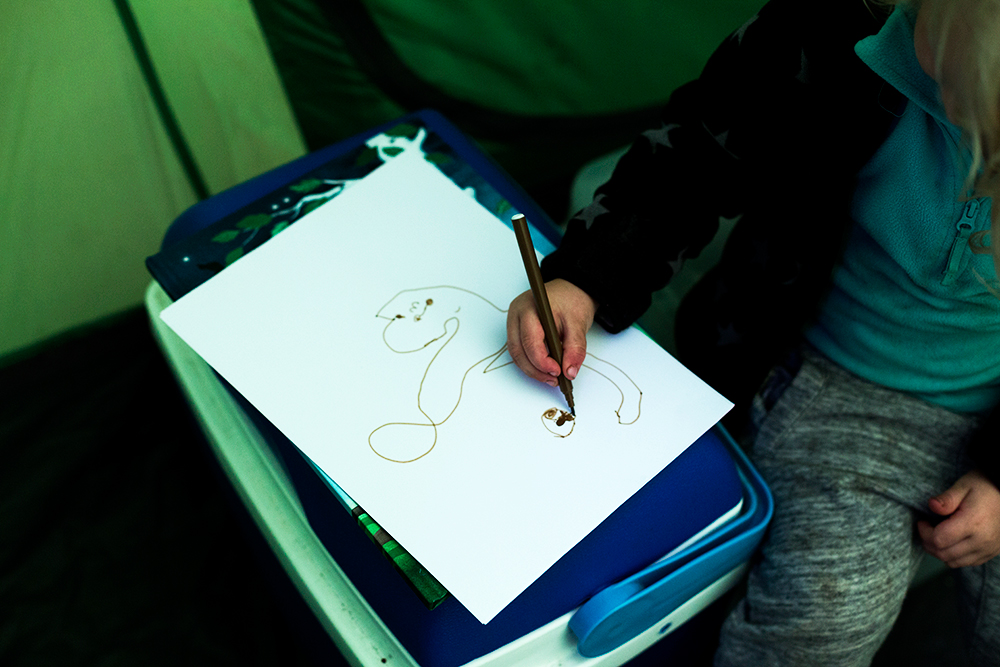 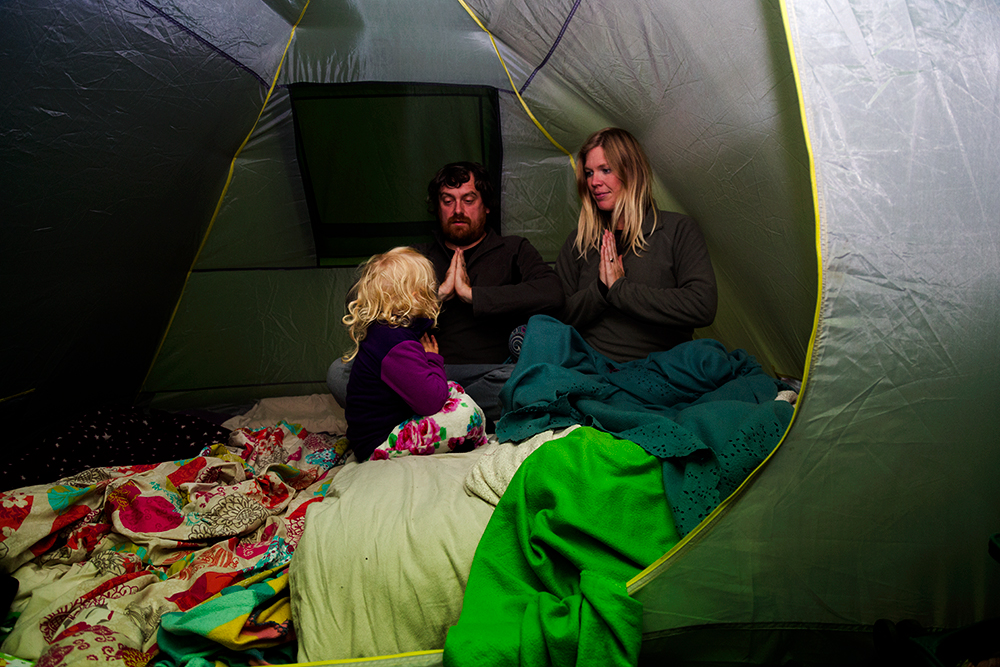 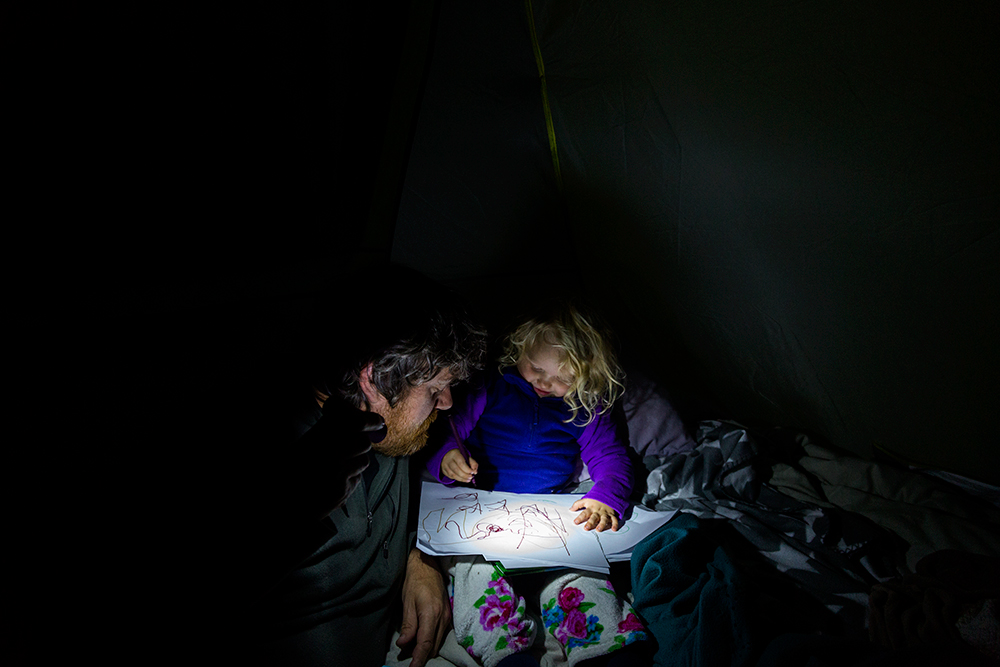